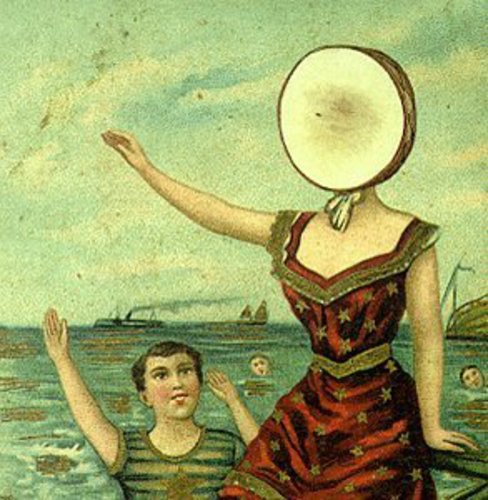 In the Aeroplane Over the Sea
Artist: Neutral Milk Hotel
Format: CD
New: Available now at the Record Store $15.97 $13.57 ON SALE
Wish

Jeff Mangum moved from Athens, Georgia to Denver, Colorado to prepare the bulk of the album's material with producer Robert Schneider, this time at Schneider's newly-created Pet Sounds Studio at the home of Jim McIntyre.

The album's cover was a collaboration between Mangum and R.E.M.'s staff designer, Chris Bilheimer. The general design reflects the taste of Mangum: Bryan Poole said that "[Mangum] was always into that old-timey, magic, semi-circus, turn-of-the-century, penny arcade kind of imagery." One particular piece Mangum showed to Bilheimer was an old European postcard with an image of people bathing at a resort, which was then cropped and altered for the cover. Bilheimer also designed a broadsheet-style lyrics sheet for the album, and inadvertently titled "Holland, 1945" in the process; Mangum wanted to use either "Holland" or "1945" for the song, and Bilheimer suggested he use both.

The album continues to sell well, and was the sixth-best-selling vinyl album in 2008. - Wikipedia