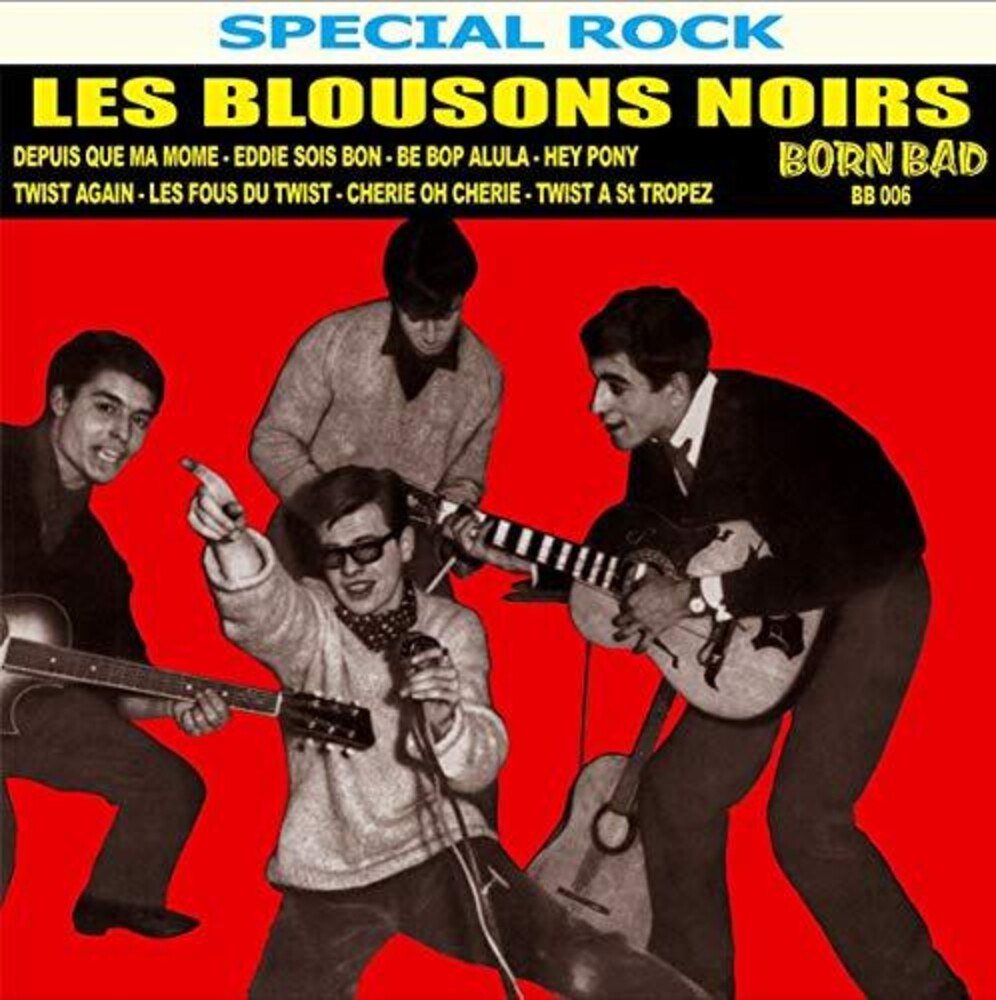 An ultimate testimony to adolescent rage and the spirit of rock n' roll, these eight songs by Les Blousons Noirs (Black Jackets) are essential to understanding what rock music is and what it should always be: determined, primitive and wild. Originally from Bordeaux, Les Blousons Noirs seem to have bought their instruments the morning of their recording session: the singer sings out of time, the drummer is feverish and the guitarist a total whack. Nothing is repressed with Les Blousons Noirs. Their enthusiasm and carefree attitude are such that the songs are delightfully exuberant. Their two unusually unique EPs were released in 1961 (Special Rock) and 1962 (Special Twist) on the Guilain label. And as a French band, they quite naturally decided to cover French rock standards... slaying them with enthusiasm. Les Chaussettes Noires (The Black Socks), Les Chats Sauvages (The Wild Cats), and two of Johnny Hallyday's songs were thus brought to the spotlight. The only original track was "Les Fous Du Twist" (Crazy for the Twist) written by their young producer Claude Ghislain. For the record, their "Eddy Soit Bon" (Eddy be Good) was originally Chuck Berry's "Johnny B Good". The fact that they used the same picture for the cover of both EPs reinforces the feeling of total uselessness and "don't give a fuck" attitude that is so often embraced by rock n' roll. Les Blousons Noirs were forerunners of the French punk and DIY scenes. Remember that it wasn't until 1964 that Hasil Adkins published his "She Said", 1965 that the Peruvians of Los Saicos put out "Demolicion", and 1966 that the Legendary Stardust Cowboy delivered his killer "Paralysed". The Shaggs and their late Philosophy Of The World in '69 were too late to the game. In order to become a band with a cult following, all Les Blousons Noirs had to do was remain anonymous. Our investigations to try and identify these rock n' rollers were futile. The only information regarding the identity of Les Blousons Noirs comes from Marc Liozon (Editor-in-Chief of the club des années 60 fanzine) who found a copy of the second EP dedicated to a certain Minie. This exposed that the band was comprised of Clod on lead guitar, Jo on rhythm guitar, Did on drums, and Samy on vocals - a nice bunch! In short, no known identities, no concerts, no pictures, two insane EPs out of nowhere.