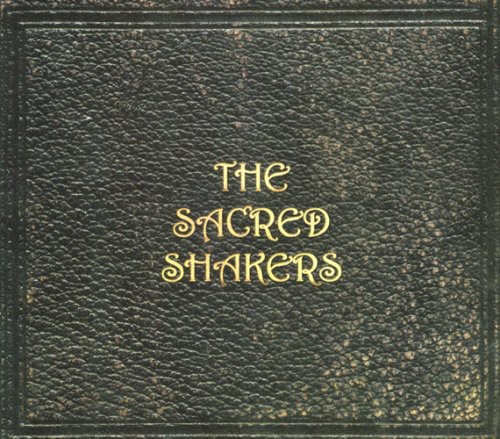 For The Sacred Shakers, there's nothing finer than old-time, country and blues-influenced gospel music. Think Hank Williams, The Carter Family, The Stanley Brothers, Son House, and Mississippi Fred McDowell. Beginning in 2005, that music drew a small but ever-widening circle of some of Boston's finest musicians and vocalists together at the Country Gospel Brunch concert series. In short order, The Boston Globe described the group as `a local Who's Who of all-star roots musicians.' And last summer, after hearing a single live performance by The Sacred Shakers, indie Signature Sounds label owner Jim Olsen encouraged the group to record their repertoire. On their eponymous debut, The Sacred Shakers offer new life to the gospel genre by revisiting the stripped down country and bluesy gospel material that inspires them. On The Sacred Shakers, respect is paid to the old tunes but don't look for a strict interpretation on this 14-track disc of mostly traditional gems plus a few gospel classics from Hank Williams and George Jones. Forget about the R&B grooves and slick sounds of modern gospel. Unlike many modern artists' versions of heavy spiritual tunes, the Shakers don't clean things up or over-produce and make it sound pretty. The Shakers simply play the songs and transition effortlessly from slower acoustic country/bluegrass like `Ready To Go Home,' to their rollicking rockabilly version of the traditional `I'm Gonna Do My Best,' and on to the droning blues of `Travelin' Shoes.' As for the religious angle of these songs, the Shakers are an omni-denominational band, joining Christians, Jews and Agnostics to share this genuine, historic music with their believer and non-believer fans. The roots of the Shakers go back roughly ten years, when drummer Jason Beek (Whoa! Man! Jesus!) discovered this gospel music while searching for the influences of bluesmen like Muddy Waters and Howlin' Wolf. `Together with a couple friends, we kept digging into the roots of blues and then old-time and eventually country and gospel music influenced by old-time and blues. The first gospel blues we heard was Mississippi Fred McDowell's album Amazing Grace from the late `60s and it changed our lives,' says Beek. He went on to format and host `American Primitive,' an MIT radio show featuring music from obscure reverends, Blind Willie Johnson, Son House, Blind Roosevelt Graves. His new passion in this music also led him to bands like the Tarbox Ramblers, `Every week we could see a modern band covering the very artists we were just discovering; people like Charley Patton, Leadbelly, The Carter Family, Fred McDowell, E.C. and Orna Ball and Reverend Gary Davis.' Beek soon befriended and performed with the Ramblers and in various side bands with Ramblers' bass player Johnny Sciascia (Cranktones, The Spurs) and violinist Daniel Kellar (Laurie Geltman, Vasco De Gama). While performing with Michael Tarbox one night in 2004, Beek was introduced to Boston bluegrass man Daniel Fram (Muddy River Rounders, Watch City Opry), `Michael thought we ought to know each other; that we were coming from the same places musically.' Beek went on to perform with Fram at his weekly old-time/country music event, The Watch City Opry. It was at the Opry that Fram introduced Beek to Boise native Eilen Jewell, who was sitting in on the Opry and considering a move to Boston. Jewell, of course, did move to Boston and with Beek formed the Eilen Jewell Band (which eventually added Sciascia and Kellar to the roster, with Jerry Miller later taking Kellar's spot to form the current lineup). With the connections made, and after a friend described hosting a country gospel brunch in the Southwest, Beek approached these like-minded musical friends - all well-versed in older country blues and country gospel material -- in the Boston music scene and The Sacred Shakers was born. The Country Gospel Brunch performances always featured three leading singers: Fram, who covered mostly bluegrass and country artists, Jewell with her bluegrass and old-timey sounds, and Beek. Sciascia and Kellar rounded out the Shakers and each week's concert showcased a guest artist. Recent additions to the Shakers, and performing on the CD, are banjo master Eric Royer (Royer's One Man Band, The Resophonics), soulful singer Greg Glassman (Tastes Like Gravy String Band) and the guitar theatrics of Jerry Miller (The Spurs, Bluestime). The beauty of The Sacred Shakers (live and on CD) is the easy mix and match of lead vocalists, with Fram taking lead backed up by Jewell's rich harmonies on some numbers, Beek and Jewell joining voices on another, and the pure ring of Glassman or Royer out in front on others - all with some combination of the others' voices not far behind. The choice of songs was an equally democratic process, as Beek puts it, `One of us heard a particular tune, brought it to the band and together we processed it through the Shaker format to come out sounding good and fun.' That approach of putting a contemporary spin on older material follows the recipe Jewell, Beek, Sciascia and Miller took collectively as the Eilen Jewell Band on her internationally acclaimed 2007 label debut, Letters From Sinners & Strangers. Of Jewell's original songs and selection of covers, The Washington Post praised `her knack for giving older songs a traditional feel with modern flair.' And like that debut, The Sacred Shakers is a wonderful distillation of classic folk, country and blues styles delivered by an unforgettable chorus of voices.