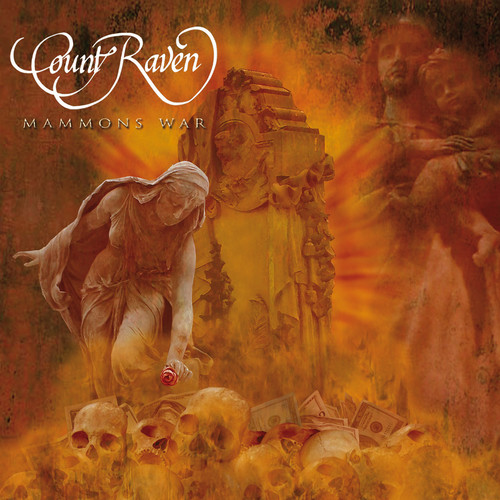 2019 DIGIPAK RE-RELEASE (of the groups 5th album, 2009) with one bonus track ("Wolfmoon" from the Count Raven/GRIFTEGĂ…RD split 7") added on as bonus material. The Raven hatched in 1989 and spread it's wings twice that year resulting in two demos. It met with the Hellhound and first took flight to darken the skies the year after with the release of Storm Warning. It's caw echoed across the doomed lands of the world and the people trembled and were enraptured at this sign of things to come. Not to leave them at unease with a prolonged absence Destruction of the Void appeared only two years later and habitually the Raven returned every two years with High on Infinity and Messiah of Confusion as the outcome.Unfortunately 1999 saw the end of the band and Dan "Fodde" Fandelius (guitars, keys, vocals), Tommy "Wilbur" Eriksson (bass) and Christer "Renfield" Pettersson (drums) went their separate ways. Fodde started anew with Doomsday Gouvernment and Wilbur with Semlah.Come 2003 and in the deep forests of the north the Raven started to stir in it's nest again. The old crew got back together and performed some very well received live gigs but past differences doomed the reunion from recording a new album, Wilbur and Renfield left for a second time and were replaced by Fredrik Jansson (Abramis Brama, Witchcraft) and Jens Bock, respectively.Fodde, who waited a long time to release a new album, believed Count Raven's music could always be further developed and that the stagnation of the old line-up was perhaps something to be thankful of. It meant it was time for a new phase, which the whole band looked forward to very much, and this album was the beginning of that phase.The Mammon project began in 2006 and the band wanted to take their time and make it into something special as it was to be a comeback album. They constantly worked hard and used the extra time to rehearse, adjust and improve the material, and as always to make the riffs and music magical; to make it transcendental and become a journey of emotions and experiences. To them the music they played was 110% about emotions. Add to that the existential lyrics and you get an elevated effect of emotions, searching, reflection and a hunger for knowledge. This is what the band still wants the listener to experience whilst listening to their music.Fast forward to 2009 and the Raven was reborn in truth witnessing the release of "Mammons War". Mammon is a term, derived from the Christian Bible, that's used to describe greed, avarice, and unjust worldly gain and the word itself is a transliteration from the Hebrew word "mammon", which means "money." This told the listener the band still related their frustrations and unhappiness with social injustices and the senselessness of the world with no excuses made or offered. Old fans weren't disappointed by this album musically either as it was a natural progression from where they left off. There's of course more maturity behind the dirges which augments the anger, disappointment and weariness at a flawed world, but ironically age also made them IiveIier. The sound itself stayed as timeless as ever, from the traditionally styled riffs to the Ozzy sounding vocals of Fodde. The Raven flew again, stronger and more inspired than ever, and the world was once again cast under it's shadow.
This website uses cookies to personalize content and analyse traffic in order to offer you a better experience.
I accept Learn More
back to top