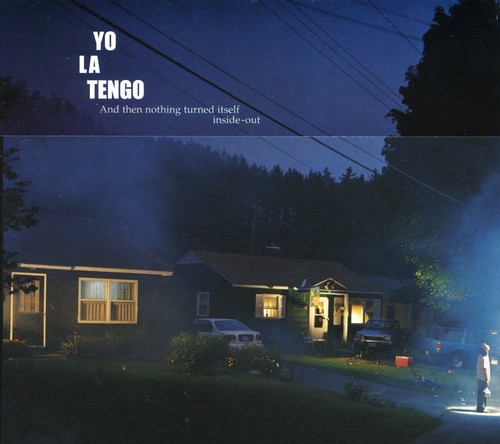 And Then Nothing Turned Itself Inside-Out
Artist: Yo La Tengo
Format: CD
New: Unavailable to be purchased or ordered at this time
Wish

Serene but complex, enormous but jewel-like, Yo La Tengo's 10th album is a matrue masterpeice that redefines the boundaries of pop and jazz, songs and soundscapes.

''And Then Nothing Turned Itself Inside Out'' is the ninth studio album by Yo La Tengo, an alternative rock music group from Hoboken, New Jersey. The album was released in February 2000 by Matador Records. The title of the album is likely derived from a Sun Ra quote: "...At first there was nothing...then nothing turned itself inside-out and became something." The album marked yet another creative shift in Yo La Tengo's songwriting with a greatly slower approach. The band continued to expand on their simplistic songwriting; many of the songs are soft ballads with very airy percussion and background noises; however, the guitars and bass provide a strong undertone of reverberation. ''And Then Nothing Turned Itself Inside Out'' features an array of backing instruments such as vibraphone and drum machines, which all lend an expansion of musical textures and differentiation of timbre.

Yo La Tengo deliver more subdued art-pop songs on this album than on any other; however, their noise-rock influence is also most present on ''And Then Nothing Turned Itself Inside Out'', with songs like "Saturday", "Cherry Chapstick", "Tired Hippo", and the 17-minute epic "Night Falls on Hoboken".

The title "Let's Save Tony Orlando's House" comes from an episode of ''The Simpsons'', titled "Marge on the Lam". It is the name of a telethon that actor Troy McClure previously hosted. During this period, many of their tracks were given temp-titles based on Troy McClure's filmography. The title "The Crying of Lot G" is a reference to Thomas Pynchon's novel ''The Crying of Lot 49''.

"You Can Have It All" is a cover of the George McCrae song of the same name, originally written by Harry Wayne Casey of KC and the Sunshine Band. Yo La Tengo's take is of a distinctly different style, with a much slower tempo. A techno version of "You Can Have It All" was used as Northwest Airlines's theme song under the ''Now You're Flying Smart'' slogan. The track "Our Way to Fall" appears in an episode of ''Six Feet Under'' titled "Driving Mr. Mossback" (season 2, episode 4). Canadian folk-rock group The Olympic Symphonium covered "Saturday" on their 2007 album ''Chapter 1''.

The album artwork is made up of photographs by surrealist photographer and Yale professor Gregory Crewdson. - Wikipedia