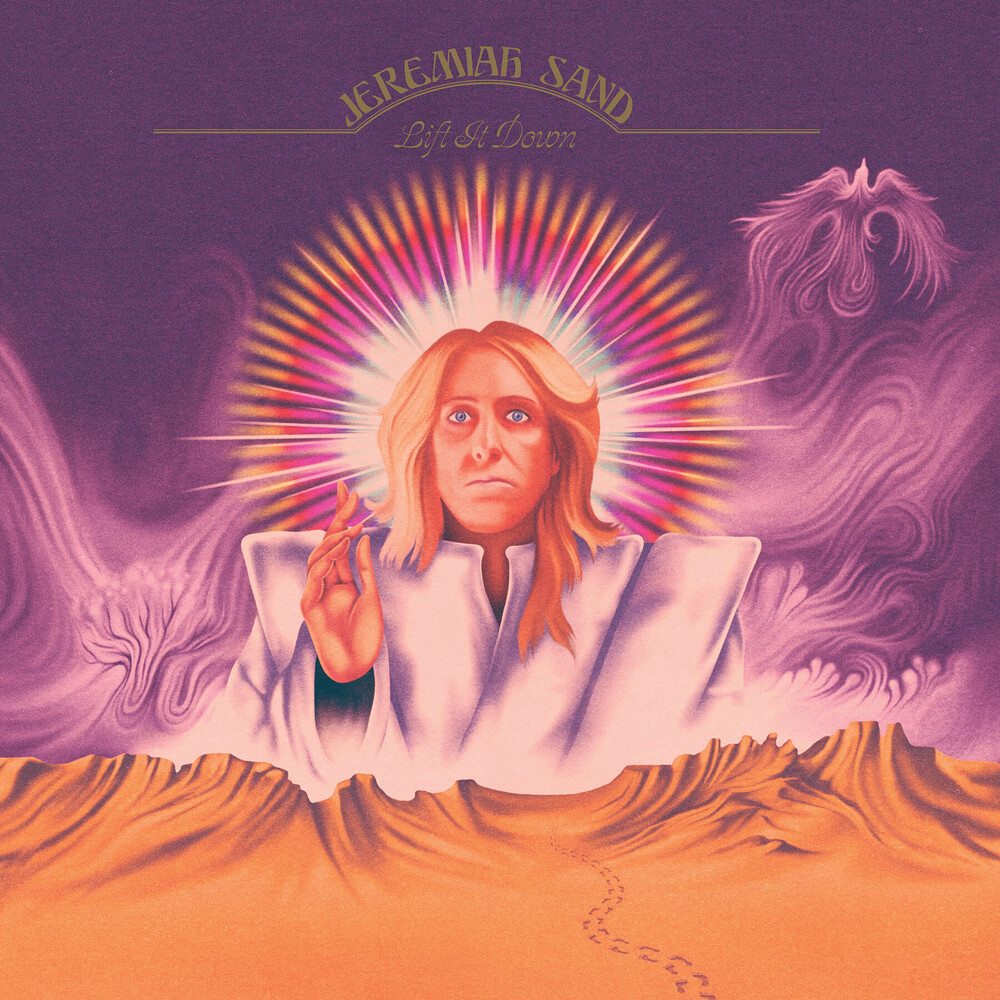 Lift It Down (Purple Vinyl) (Purp)
Artist: Jeremiah Sand
Format: Vinyl
New: Unavailable to be purchased or ordered at this time
Wish

In 1974, Jeremiah Sand and his nascent cult The Children Of The New Dawn decamp LA for the Shasta Mountain region and Redding, CA. They set up shop, begin printing leaflets, hold gatherings and start growing their ranks through recruitment. Jeremiah and the Children are not necessarily an odd addition to Redding in 1974. Since the 1930s, psychonauts and spiritual seekers have been drawn to this area in Northern California under the shadow of the dormant volcanic cone of Shasta. By 1974, urban California hippies worn down by direct political engagement with state security forces have started drifting North and the towns along the border with Oregon state are filled with ad-hoc spiritual organizations, commune builders and lost souls. Jeremiah and the Children fit right in. A few years prior to assembling his flock, Sand had self produced and released an album of psych-folk that was unremarkable in almost every way, save for the unrelenting vanity and egoism on display in the lyrics. This early album is one of the only existing documents of Sand. The commercial failure of the album became the catalyst for Sand to leave Southern California and settle in a place where his "truth" would be "received by pure and open hearts". By mid 1974, the Children have grown in rank and Jeremiah becomes obsessed with recording "his masterpiece"... a musical message to the world, communicating a "Truth" that only he has been given spiritual access to. This project becomes the central focus of the Children. His lieutenant Brother Swann overhears that there is a small recording studio just North of the city. He arrives one day at the reception with a large gym bag full of cash and instructs the owner to cancel all sessions on the books. The studio will now focus on one thing and one thing only: helping Jeremiah realize his vision. Tents and rough structures appear on the surrounding property as the Children make the studio and it's grounds their new home. They hold recruitment meetings where Jeremiah evangelizes in between endless recording sessions. The owner and his staff begin to feel as though they're being held hostage but the money is good and the Children keep paying. Overpaying. This goes on for years. New members drift into the sessions. A disgraced professor from the Electro Acoustic Music program at Evergreen state arrives with a full Buchla system he's "liberated" from the university, Jeremiah is entranced by it and for a few weeks the only sounds coming from the studio are blasts of atonal, corroded noise underpinned by ominous chanting. The mood changes. The town begins to turn against the Children. A few people have gone missing. Some teenagers. A studio engineer. By the Spring of 1977, the entire session has broken down into hallucinogen and cocaine fueled chaos. Bad vibrations. One night in early March, after a particularly grueling mixing session, the producer and owner of the studio is startled awake by by an extremely agitated looking Brother Swann. Swann is sweating and wild eyed, casually holding a gun, explaining to the producer that "plans have changed" and that Jeremiah has "heard a calling and a Great Summons". They are leaving. All of them. That night. Swann directs the producer to put the existing reels in a lock box along with a short 16mm film, lyrics, album art and scribbled notes. Swann tells the producer Jeremiah will be back to finish his masterpiece. It all goes in the box and it's not to be opened until the Children return. They never do. In 2018, wildfires rip through Redding, CA and burns it to the ground. Over a thousand homes are incinerated. One rough structure north of the city is partially saved. There's a massive concrete basement filled with smoke and water damaged recording equipment and in the back... a lockbox. No one knows who originally took the tapes out of the charred ruin of the studio but in a few months, a very strange album is making the rounds in the more esoteric circles of the underground. A long and confusing chain of custody ensues. A lost artifact of the transitional period between the late 60s and late 70s. A flawed and malignant sounding unfinished thing, clearly the product of a psychotically inflated ego and hubris. The album is by turns: amateurish, haunting, deranged, ridiculous and (for those attuned to these things) filled with crackling negative psychic energies. So much so that Light In The Attic flat out refuses to reissue it. Eventually, it lands in Caleb's lap and Sacred Bones decides to restore the audio and give it a general release all in the name of preserving a historical document of a very weird place and a very weird time.