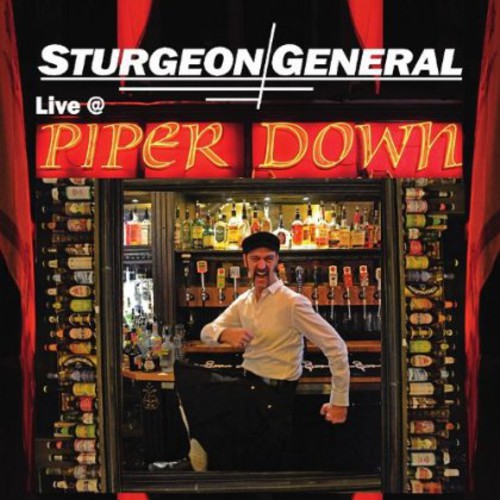 Live at Piper Down
Artist: Sturgeon General
Format: CD
New: Unavailable to be purchased or ordered at this time
Wish

The decade of the 90's was a distant time: the internet was in it's infancy, "texting" was unheard of and climate change...was still a myth. Seattle grunge may have been an institution, but close on it's heels SKA music was making waves. Nowhere else was this more evident than along the somewhat obscure, conservative Wasatch Front in Utah where the likes of Swim Herschel Swim, Stretch Armstrong, Insatiable and Sturgeon General were whipping crowds into a frenzy on a nightly basis. Formed in the early nineties by front-man and bari-saxophonist Craig Waddell, Sturgeon General epitomized the cozy underground followings SKA had generated around the country. In direct opposition to grunge's baleful dirges and angst-filled bravado, SKA proffered a carefree, hyperactive outlet of brass energy underlying it's reggae-on-steroids tempo. The band filtered many members through it's fraternity over the years, but staples Zach Griffen, Bill Hosack, Ken Marvel, Devin Affleck, Joe Kaufman, Pablo Anderson, Nate Robinson, and Richard (Phish) McCallister were welcome anchors for a band that eventually toured for more than four years nationally while promoting two albums of original material. Sturgeon began playing at Salt Lake City's Bar-and-Grill (9th south), Ashbury Pub and their ever-staple gig at Burt's Tiki Lounge. In the Sundance burrow known as Park City, Sturgeon regularly played to sellout rooms at The Alamo and Jammin' Salmon where they attracted their manger, Ben Rosch. The energy of performances were electric and it was often difficult to determine who was more wired: the band or the 'skankin' crowds, as many a busted stage floor can testify to! Fan favorites Mojave, Edge of the Knife and Shut Up seldom left the dance floor empty or dry from sweat and spilled beers. One of the great advantages of watching Sturgeon play was that fans would sweat out as much as they imbibed, making the bartenders happy while accounting for an intense aerobic exercise session. Life on the road was filled with all of the glory, frustration and insanity that many have come to associate with the rock-star life. Sturgeon General wandered far from Utah, frequenting the east coast and making a name for themselves in small college towns and metropolises alike, gaining fans wherever they went. How crazy you ask? Band highlights from the road include streaking the campus at Mount Holyoke (a conservative women's college), performing semi-regularly at the SKA Brewery in Durango Colorado, getting their own beer named after them by the Mt. Olympus Brewery: Sturgeon General Stout, 4th of July gig at the VFW in San Antonio, Texas with Monkey (band), and touring the east coast when 1999's hurricane Floyd struck the region making for a crazy set of weeks! Sturgeon also recorded a radio commercial for Corona beer in the late 90's featuring their song "Saturday" that teased with vaulting them into the national spotlight. Then there's the time tenor player Jacob (his body still painted green from an Incredible Hulk Halloween costume), nearly drove the tour van off the road in a blinding snowstorm. Kicked out of hotels, stiffed by club/bar owners, fights, music label disputes, out of money, getting lost; all in a day's work for the indefatigable touring SKA band! Through it all, Sturgeon General endured until the day they decided to maintain responsible lifestyles and stop angering their wives/girlfriends. But about every 1Â˝ -2 years the alumni cobble together a reunion weekend and remind their Salt Lake City faithful (and new fans) what they have been missing. What you are listening to constitutes a sample of Sturgeon General at their best: two nights at Piper Down in SLC on a dreary weekend in January, 2012. The air crackled with electricity and brass notes, and Craig and the band were in rare form. For those two nights, SKA fans could break out their flannel and head the bar to skank it up...just like it was the 90's. Dedicated Groupie-IAN SCHARINE.